ROLL BACK THE YEARS PRESENTS 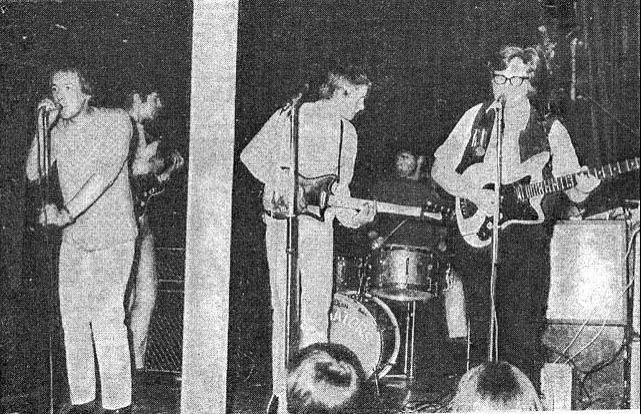 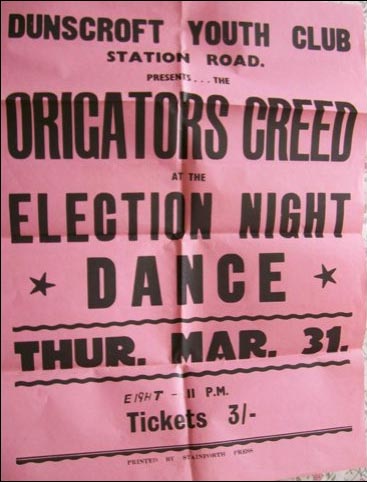 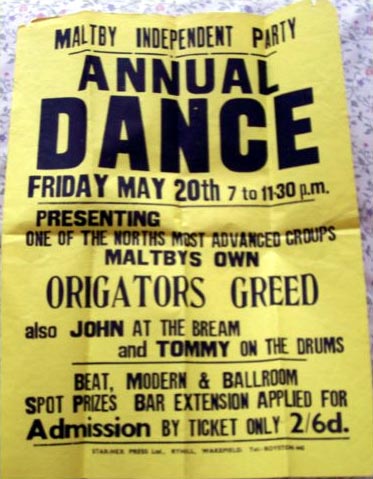 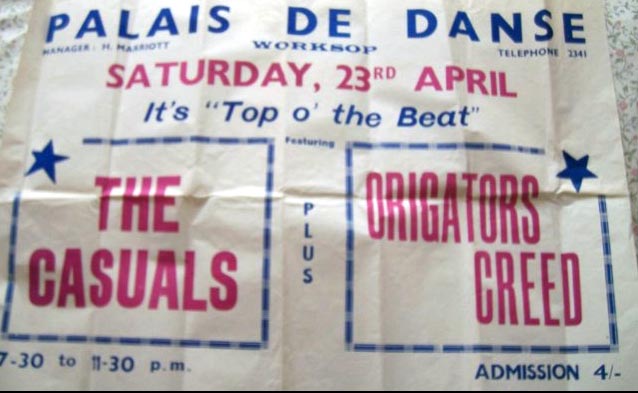 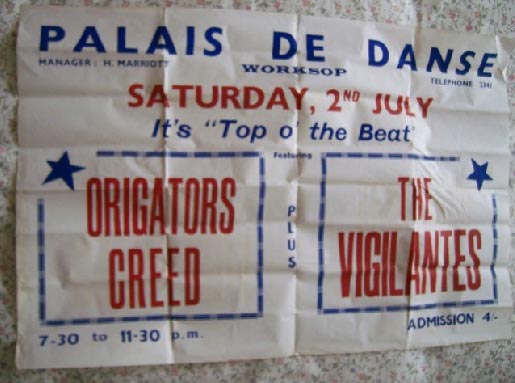 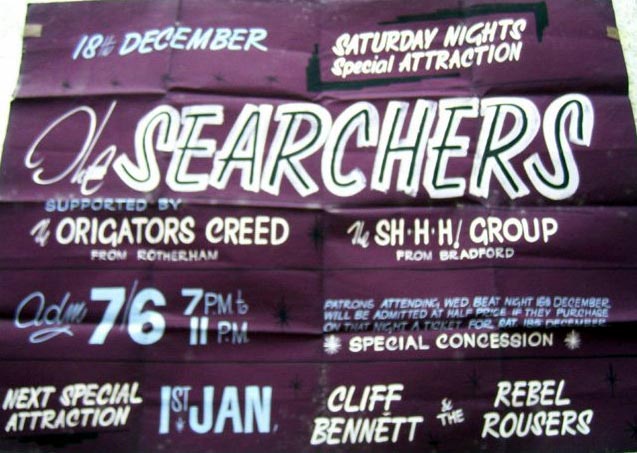 Rolling Back The Origators Creed
With Al Smith

The Origators Creed formed in early 1965 in the Yorkshire village of Maltby, near Rotherham. Mick Winch lived at Thrybergh, but the others were close neighbours in Maltby. Glen, Albert, Alan and Mick all went to Maltby Grammar School. They can be seen scattered about the Maltby Grammar School photo for 1962 on the MGS website. Brian went to Maltby Hall Secondary School. Glen was 15, the others were 16.
Glenn Brookes and Albert Smith had spent a year together in a four piece group also formed in Maltby: The Outsiders. Brian Fuller, Alan Trueman and Mick Winch had attempted, without success, to form a line-up from the same music pool.
Dave Crabtree (rhythm guitar) and Alan Bews (drums) were the the other half of The Outsiders.
Partly because Glenn and Albert had spent a year playing together in The Outsiders, but mostly likely because Brian was a brilliant drummer, the rhythm section was solid from the start.
The repertoire included material from The Who, The Birds, The Yardbirds, The Action, The Pretty Things, Downliner Sect, Chuck Berry, and a fair slice of R&B standards. Anything we liked, really. All of it was mangled to produce what the local music press (what there was of it) frequently referred to as pop-art, art-music.
By the standards of the day, The Creed were VERY loud and did feature one of the early fuzz-box distortion units. Brian had two bass drums, a novelty at the time.
Largely a covers band, but with a couple of original songs from Alan Trueman and two originals from John Williamson, one of the founder/owners of Unit 19, Sheffield's first independent recording studio. The Unit 19 connection led to a (failed) EMI audition and a short-lived clothing account at a Sheffield boutique-Mod ST. One reason it was short-lived was the fact that Creed refused to change their name to Mod St.
Bob Davis of the Bob Davis Set or Bob Davis Mood or Bob Davis 4 met up with Creed at EMI. Unit 19 had some idea of sponsoring Bob as a solo vocalist. He was better than good. He showed his talents then caught the train home. The Creed stayed in London and among other things, visited the Marquee Club, the 100 Club and Wallace Amplifiers in Soho. The Action and The Bo Street Runners were on stage at the Marquee and The Five Proud Walkers were at the Club 100, using Wallace amps.
A vinyl 45 demo-disc of the John Williamson tracks came out of the Unit 19 sessions, featuring Mick on vocals (of course) and Alan and Albert on backing vocals. But the disc disappeared and no further copies were produced. The studio suffered damage when a water main burst a few months after opening and the Creed's tape was among the lost.
The intended (A) side of the disc was "We've Got Long Way To Go". Prophetic really. The title of the (B) side escapes me, though I think it was called "The Image."
John Firminger in his generally excellent book, "Not Like A Proper Job," somehow fails to record the fact that the Creed were present-and actually recording-at Unit 19 on the day the studio opened. He also gets the Creed's timeline wrong. And although Unit 19 got under way in April 1966, the official opening took place on Tuesday 29th March 1966.
For reasons now lost to posterity, the group never had any publicity photographs. The only known photograph of the group appeared in the "Top Stars Special" for January 1966, playing a gig (one of many) at Terry Thornton's Esquire Club on Leadmill Road. Two books have appeared in recent years, one each on the Mojo and the Esquire, but both are largely neglectful of the local scene. The Creed photo and otherwise are absent.
The group played gigs all over what is now South Yorkshire (occasionally beyond) but was then the south end of the West Riding of Yorkshire. Key venues were the Rotherham Twist Club, run by Wilf Wake, the 21-Club (Roger Brookes), Doncaster Co-op Ballroom, run by Doncaster Coop Ballroom(!), Rawmarsh Baths (Les Slater), Terry Thornton's Esquire Club Sheffield, (umpteen gigs) Pete Stringfellow's Mojo Club in Sheffield-one gig only, Saturday 13th November 1965. And the Jazz Workshop at Scunthorpe.
Following the "high" of the EMI session and the Unit 19 connection, things crumbled a bit. Consequently, Al Smith left the group in the Summer of 1966 and was replaced briefly by Roger Allcock from Doncaster. The new line-up folded altogether very shortly afterwards and that was that. Shame.
What happened to Roger I don't know, but all five of the original Origators went this way and that, largely drifting out of anything resembling organised gigging. Double shame.
High Points?
Being part of a terrific local music scene.
Backing Champion Jack Dupree with 10 minutes notice at The Esquire when his scheduled band got lost and didn't turn up.
Playing a couple of gigs at the Esquire with Joe Cocker, pre-fame (Joe's not ours, of course).
On the day the Creed failed their EMI audition, February 15th 1966, The Who played the Esquire. Reports from some of those present were good, but really "They were just like the Origators Creed." If only.
Playing the evening session at the Mojo, then sticking around for the all-nighter to meet (briefly) and witness Wilson Pickett. And the Stormsville Shakers.
Supporting more than several chart acts.
Generally having a great time. Those were the days. 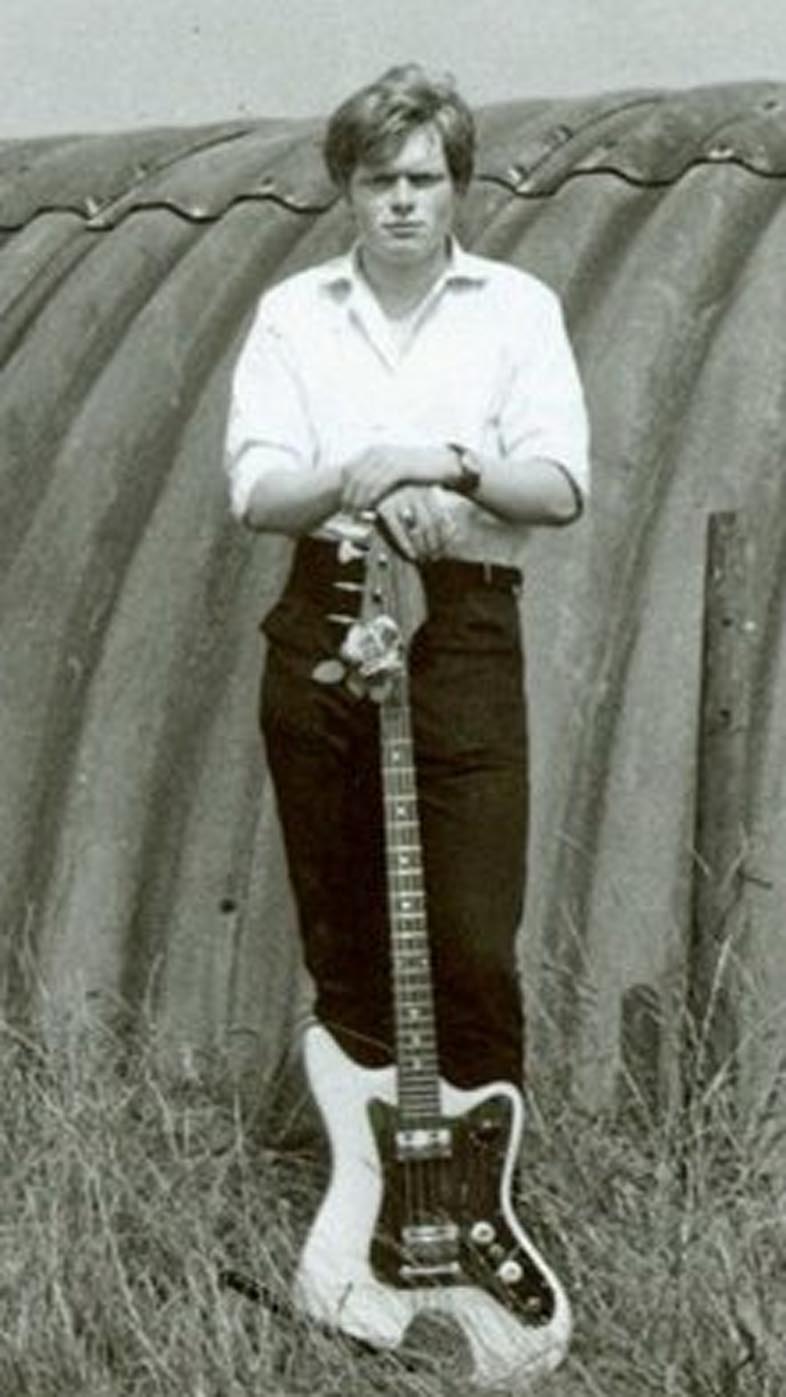 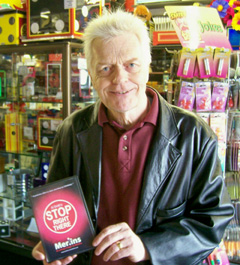 home | most wanted poster | roll back the years

roll back the years produced by pete bradley