I am Ron Kelly, the drummer with The Elizabethans and Kindness who went on to become Smokie. I also worked with Wakefield Band Stormer who were Method before that. The reason for this email is that I have been in touch with Mike Close and we were talking of Ronnie Storm. I played for Ronnie a few times when he was Managed by Mark Jordan who was also our manager at the time. On your webpage you say that you think that Ronnie never recorded................but he did and I have the only copy (unless Ronnie has one himself)......and I will attach the mp3 of it to this email..........It is called 'Desire' was recorded in one session at Calrec Studios at Hebden Bridge in 1970 and the backing musicians were myself on drums, Chris Norman Organ, guitar and Back vocals, Alan Silson, Lead guitar and back vocals and Terry Uttley, bass guitar and back vocals........all of us from Kindness.........In fact the title was going to have the words Fuzzy Barnet and Kindness but Mark and Ronnie changed their minds and so the band became Fuzzy and The Barnets.

I think that it is important to share these things with others especially if it brings back happy memories of people. I have quite a few of Ronnie myself...............a quick one about his voracious appetite. When I was in Kindness our van broke down so Ronnie very kindly took us in his van to a gig in Otley. After the gig we were on our way back when Ronnie spotted a chippy. Quick as a flash he stopped the van and was first in the queue. He ordered fish and chips four times and two tea-cakes. We all said "thanks Ronnie" as we thought he had ordered for us, "but can you make that four tea-cakes as well, because we all would like one".........................he turned, laughed and said to us...."You order what you want, these are mine" and turned on his heels and disappeared out of the shop, with a whole fish disappearing into his mouth..........Good old Ronnie.....I hope that he is still around because where ever he went he was the life and soul of the party.

Just another very quick story about Ronnie.
Ronnie was a really lovely guy and would do anything for anyone......he had a heart of gold. In the earlier fish and chip story where we were in his van as ours had broken down.......he was the one who came to our rescue. We had broken down on the M1 and had just managed to make it to Woolley Edge services thankfully, as in those days there were no mobile phones. Being a young poor band we had no rescue cover either, but I remembered Ronnie's phone number and called him at home and luckily he was there. I told him of our predicament and he set off immediately to help us. About half an hour later, this old Rover 90 pulled up next to us and out got Ronnie, towrope in his hands. We all started laughing and someone said "there is no way that your car will tow a double-wheeled transit full of equipment back to Wakefield.......He gave us his usual big grin and said "lets see shall we".....and attached the rope first to our van and then to his Car. We all jumped into his car (apart from Bob, our roadie, who obviously had to drive our van)....and waited with baited breath as this Rover 90 car, with 5 adults in it, took up the slack and prepared to tow our van off the motorway. There was a loud cracking sound as the rope reached full tension and then suddenly we were off, over the car park and down the slip road on to the M1. Ronnie had a huge grin on his face as if to say "I told you so" and within about 20 minutes we were at his garage. He told us to leave the van with him and he would sort it out for us. He then helped us unload our gear into his van and we set off to the gig after calling at his house for sandwiches and coffee, which his Mum very kindly made for us.
After the gig in Otley, he dropped us all off at our homes and said that he would see us the following day with our van, as he knew what was wrong with it and could repair it for us. At three the next afternoon he rolled up in our van, outside Mark Jordan's offices and gave our roadie the keys..........he had fixed the van and had even put us some petrol in it as we were nearly out of fuel when we had broken down the previous day. When we asked him how much we owed him, he just smiled and said that he was just happy to help us get back on the road and he didn't want any money........so we replied that the next time he came to see us that the drinks would be on us. We later found out from Mark that he had gone down to his local scrapyard that morning and had bought the part that we needed. He had then taken about two hours to repair the van before putting four gallons of petrol in it and bringing it back to us...and the repair worked perfectly!!!!!!!! Not only did he have a heart of gold but he was also a very good mechanic too..............cheers Ronnie....we still owe you one!!!!!!!

I hope that it (the Track) has happy memories for those who hear it. I always wonder when I listen to this track why Ronnie didn't put a sax solo on it.....as you probably remember he was a pretty good sax player............I always remember him playing three saxes in one go........If I remember correctly he used to put one sax on a stand and then hold two and then play all three at the same time....................no wonder he could put a whole fish in his mouth at one go...Good old Ronnie. I have a few good memories of him and stories to tell. (we'll wait for them - Ed.) 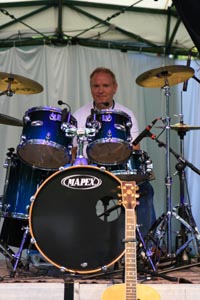 In case you missed it listen to Fuzzy (Ronnie) and the Barnets playing Desire.

What a fantastic contribution from Ron !! (Ed.)

This is a link to what Ron is doing now www.myspace.com/thespiritofsmokie take a look and take a listen it's fab.
Spirirt of Smokie look at this link it's bril!! ( it's a big file be patient)

home | roll back the years

roll back the years produced by pete bradley